The Telephone Consumer Protection Act of 1991 (TCPA) protects wireless telephone users from receiving calls via an automated telephone dialing system (a robo-dialer) or an artificial or prerecorded voice. While the TCPA was put into effect in 1991, recent actions taken by the Federal Trade Commission (FTC), increased traction in the media, and the ease with which claims can be filed continue to encourage class-action telemarketing litigation today. Plaintiff and defense lawyers are increasingly interested in how data analytics—dialer records in particular—can aid or hurt their cases.

For consumers looking for inclusion in a class alleging receipt of unwanted calls, one of the most important characteristics for class determination is whether the consumer owned a wireless telephone at the time alleged calls were placed. So, how is this done?

The landscape of cellphone usage has changed dramatically since the TCPA was put into effect. Movement from landline phones and fax machines to smartphones and email communication has increased exponentially since 1991, when a cell phone may have looked like this:” 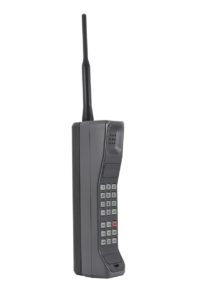 In terms of designating a phone number as cellular, two determinations can be made: the number either can belong to a wireless block or could have been ported from a landline to a wireless phone.

The first seven digits of a phone number are referred to as a “block” (the area code, exchange, and first digit of the remaining four-digit number). For example, “1234567” would be the block associated with the phone number “123-456-7888.” Phone carriers own these blocks and can assign 1,000 unique phone numbers to consumers per block; that is, 1,000 options for the remaining three digits of phone numbers in a particular block.

If a wireless carrier owns a block, it would be easy to assume that block contains 1,000 wireless numbers. However, in 2003, the Federal Communications Commission allowed consumers to maintain ownership of an assigned number and use it as either a landline or cell phone, also known as wireless local number portability. This allowed for the “porting” of numbers, or changing a particular ten-digit phone number from wireless to landline and vice versa.

For telemarketers making real-time calls and analysts reviewing historical call data for litigation purposes, tracking both wireless block inclusion and the porting of numbers is of paramount importance when determining landline or wireless designations.

An independent company named Interactive Marketing Solutions (IMS) provides this information. IMS was organized in 2001 in partnership with the Data & Marketing Association, a trade organization for marketers, and aimed to help direct marketers with privacy regulation compliance relating to wireless telephone numbers and to help consumers who did not wish to receive unsolicited marketing materials. Today, IMS is the “country’s largest single-source supplier of Wireless Identification Products.”[1] In addition to other products, IMS provides compliance officers and analysts with a series of six tables that can be used to identify wireless block usage and the porting of numbers both currently and in the past. The use of these tables for wireless identification in TCPA litigation was accepted by the U.S. District Court for the Northern District of Illinois, Eastern Division in Tomeo v. Citigroup, Inc. (No. 1:13-cv-04046, N.D. Ill. 2013).

The “Wireless Block Identifier” list (“Blocks List”) provides a list of blocks owned by wireless carriers at the time the Blocks List is downloaded from IMS. A call placed to a phone number whose first seven digits are on the Blocks List can be designated as currently wireless, unless the number has since been ported. Tracking of porting, a secondary step, is explained below. For blocks that were only owned by a wireless carrier for an express period of time, including those currently in use, an additional audit table provides start and end dates for block ownership. Because the audit table encapsulates the Blocks List, the audit table alone can be used to identify currently and historically active wireless blocks. However, specific carrier information is not provided.

Once a number has been identified on a blocks list, the number must be checked for porting: changing from landline to wireless or vice versa. IMS provides two databases (“ported number lists”) that track when specific phone numbers are ported. Similar to the Blocks List, the ported number lists report the most recent date the number was ported in one direction or the other (current data), while two audit tables dating back to 2004 track start and end dates for historical inclusion on these ported number lists.

By tracking wireless block inclusion and the porting of numbers, analysts can determine if and when a phone number was registered as wireless. Compliance officers want to ensure telemarketers have not and will not communicate with wireless numbers without express consent. Defendants in TCPA cases want to do the same. While there are clear flaws in the systems that are meant to protect consumers from robo-dialer calls, like the National Do Not Call Registry, determining if a number is wireless can be easily assessed using the IMS data and analytics software. You simply need the right tools

The views and opinions expressed in this article are those of the author and do not necessarily reflect the opinions, position, or policy of Berkeley Research Group, LLC or its other employees and affiliates.